Late yesterday, state District Judge David K. Thomson, who presided over the ongoing teacher-evaluation lawsuit in New Mexico, granted a preliminary injunction preventing consequences from being attached to the state’s teacher evaluation data. More specifically, Judge Thomson ruled that the state can proceed with “developing” and “improving” its teacher evaluation system, but the state is not to make any consequential decisions about New Mexico’s teachers using the data the state collects until the state (and/or others external to the state) can evidence to the court during another trial (set for now, for April) that the system is reliable, valid, fair, uniform, and the like.

As you all likely recall, the American Federation of Teachers (AFT), joined by the Albuquerque Teachers Federation (ATF), last year, filed a “Lawsuit in New Mexico Challenging [the] State’s Teacher Evaluation System.” Plaintiffs charged that the state’s teacher evaluation system, imposed on the state in 2012 by the state’s current Public Education Department (PED) Secretary Hanna Skandera (with value-added counting for 50% of teachers’ evaluation scores), is unfair, error-ridden, spurious, harming teachers, and depriving students of high-quality educators, among other claims (see the actual lawsuit here).

The journalist of the Santa Fe New Mexican, though, provided the most detailed information about Judge Thomson’s Order, writing, for example, that the “ruling by state District Judge David Thomson focused primarily on the complicated combination of student test scores used to judge teachers. The ruling [therefore] prevents the Public Education Department [PED] from denying teachers licensure advancement or renewal, and it strikes down a requirement that poorly performing teachers be placed on growth plans.” In addition, the Judge noted that “the teacher evaluation system varies from district to district, which goes against a state law calling for a consistent evaluation plan for all educators.”

Here are some other highlights that I took directly from Judge Thomson’s ruling, capturing what I viewed as his major areas of concern about the state’s system (click here, again, to read Judge Thomson’s full Order):

The PED also argued that “an injunction would hurt students because it could leave in place bad teachers.” As per Judge Thomson, “That is also a faulty argument. There is no evidence that temporarily halting consequences due to the errors outlined in this lengthy Opinion more likely results in retention of bad teachers than in the firing of good teachers” (p. 75).

Finally, given my involvement in this lawsuit and given the team with whom I was/am still so fortunate to work (see picture below), including all of those who testified as part of the team and whose testimonies clearly proved critical in Judge Thomson’s final Order, I want to thank everyone for all of their time, energy, and efforts in this case, thus far, on behalf of the educators attempting to (still) do what they love to do — teach and serve students in New Mexico’s public schools. 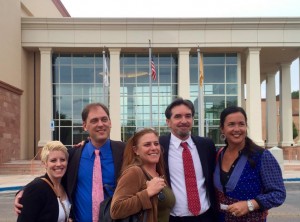 4 thoughts on “Victory in Court: Consequences Attached to VAMs Suspended Throughout New Mexico”