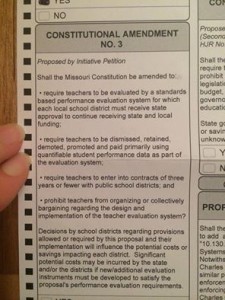 This is VAM with a vengeance.

This ballot resolution is the work of the far-right Show-Me Institute, funded by the multi-millionaire Rex Sinquefeld. He is a major contributor to politics in Missouri and to ALEC.

The Center for Media and Democracy writes about him:

‘By examining what Sinquefield is up to in Missouri, you get a sobering glimpse of how the wealthiest conservatives are conducting a low-profile campaign to destroy civil society.’

‘Sinquefield told The Wall Street Journal in 2012 that his two main interests are “rolling back taxes” and “rescuing education from teachers’ unions.’

‘His anti-tax, anti-labor, and anti-public education views are common fare on the right. But what sets Sinquefield apart is the systematic way he has used his millions to try to push his private agenda down the throats of the citizens of Missouri.”