In its paper version next week, TIME Magazine will release an article titled “Rotten Apples: It’s Nearly Impossible to Fire a Bad Teacher.” As the title foreshadows, the article is about how “really difficult” it is to fire a bad teacher, and how a group of Silicon Valley investors, along with Campbell Brown (award winning news anchor who recently joined “the cause” in New York, as discussed prior here), want to change that. 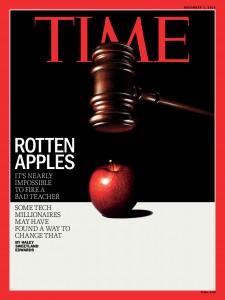 The article summarizes, or I should say celebrates, the Vergara v. California trial, the case in which nine public school students (emphasis added as these were not necessarily these students’ ideas) challenged California’s “ironclad tenure system,” arguing that their rights to a good education had been violated by state-level job protections making it “too difficult” to fire bad teachers. Not surprisingly, behind the students stood one of approximately six Silicon Valley technology magnates — David Welch who financed and ultimately won the case (see prior posts about this case here and here). Not surprisingly, again, the author of this article also comes from Silicon Valley. I wonder if they all know each other…

Anyhow, as summarized (and celebrated) in this piece, the Vergara judge found that (1) “[t]enure and other job protections make it harder to fire teachers and therefore effectively work to keep bad ones in the classroom,” and (2) “[b]ad teachers ‘substantially undermine’ a child’s education.” This last point, which according to the judge “shock[ed] the conscience,” came almost entirely thanks to the testimony of Thomas Kane (see prior posts about his Bill and Melinda Gates funded research here and here) and the testimony of Raj Chetty, Kane’s colleague at Harvard who has also been the source of many prior posts (see here and here), but whose research at the source of his testimony has also been recently (and seriously) scrutinized given how bias in his study actually made false this key assertion.

Research recently released by Jesse Rothstein evidences that the claims Chetty made during Vergara were actually false, because Chetty (and his study colleagues) improperly masked the bias underlying their main causal assertion, again, that “bad teachers ‘substantially undermine a child’s education.” It was not bad teachers at the root cause of student failure, as Chetty (and Kane) argued (and continue to argue), but many other influences that account for student success (or failure) than just “bad teachers” (click here to read more).

Nevertheless, the case (and this article) were built on this false premise. As per one of the prosecuting attorneys, “The fact that [they, as in Chetty and Kane] could show how students were actually harmed by bad teachers–that changed the argument.”

The article proceeds to describe how, “predictably,” many teacher unions and the like dismissed pretty much everything associated with the lawsuit, except of course the key assertions advanced by the judge. The only other luminaries of note included “U.S. Secretary of Education Arne Duncan and former D.C. chancellor of schools Michelle Rhee,” who both praised the judge’s decision for challenging the “broken status quo.” The aforementioned, and self-proclaimed “education reformer” Campbell Brown, heralded it as “the most important civil rights suit in decades,” after which she helped to file two similar cases in New York (as discussed, again, here).

As the author of this TIME piece then asserts, this is a war “not [to] be won incrementally, through painstaking compromise with multiple stakeholders, but through sweeping decisions–judicial and otherwise–made possible by the tactical [emphasis added] application of vast personal fortunes,” thanks to the Silicon Valley et al. magnates. “It is a reflection of our politics that no one elected these men [emphasis added] to take on the knotty problem of fixing our public schools, but here they are anyway, fighting for what they firmly believe is in the public interest.” This is, indeed, a “war on teacher tenure” that, funded by this “latest batch of tech tycoons…follows in the footsteps of a long line of older magnates, from the Carnegies and Rockefellers to Walmart’s Waltons, who have also funneled their fortunes into education-reform projects built on private-sector management strategies.”

The article then goes into a biography of Welch (the aforementioned, “bushy eyebrowed” backer of the Vergara case) as if he was a Christopher Columbus incarnate, himself. Welch “didn’t think much about how the system actually functioned, or malfunctioned, until his own children were born in the ’90s and went on to have ‘some public experiences and some private-school experiences.” Another education-expert such an experience makes. He also had a conversation with one superintendent, who wanted more control over his workforce and inspired Welch to, thereafter, lead the war on teacher tenure, because “children [were presumably] being harmed by these laws.”

To see two other articles written about this TIME piece, please click here and here. As per Diane Ravitch in the latter link: “More: tenure is due process, the right to a hearing, not a guarantee of a lifetime job. Are there bad apples in teaching? Undoubtedly, just as there are bad apples in medicine, the law, business, and even TIME magazine. There are also bad apples in states where teachers have no tenure. Will abolishing tenure increase the supply of great teachers? Surely we should look to those states where teachers do not have tenure to see how that worked out. Sadly, there is no evidence for the hope, wish, belief, that eliminating due process produces a surge of great teachers.”