“A Concerned New Mexico Parent” sent me another blog entry for you all to review. In this post (s)he explains and illustrates another statistical shenanigan the New Mexico Public Education Department (NMPED) recently pulled to promote the state’s value-added approach to reform (see this parent’s prior posts here and here).

The New Mexico Public Education Department (NMPED) should be ashamed of themselves.

In their explanation of the state’s NMTEACH teacher evaluation system, cutely titled “NMTEACH 101,” they present a PowerPoint slide that is numbing in it’s deceptiveness.

The entire presentation is available on their public website here (click on “NMTEACH101” under the “Teachers” heading at the top of the website to view the 34-slide presentation in its entirety).

Of particular interest to us, though, is the “proof” NMPED illustrates on slide 11 about the value of their value-added model (VAM) as related to students’ college-readiness. The slide is shown here: 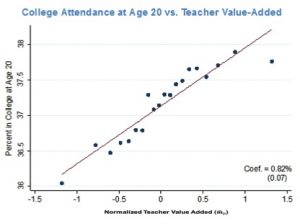 Apparently we, as an unassuming public, are to believe that NMPED has longitudinal data showing how a VAM score from grades 3 through 12 (cor)relates to the percent of New Mexico students attending college at age 20. [This is highly unlikely, now also knowing a bit about this state’s data].

But even if we assume that such an unlikely longitudinal data set exists, we should still be disconcerted by the absolutely minimal effect of “Normalized Teacher Value Added” illustrated on the x-axis. This variable is clearly normalized so that each value represents a standard deviation (SD) with a range from -1.5 SD to + 1.5 SD — which represents a fairly significant range of values. In layman’s terms, this should cover the range from minimally effective to exemplary teachers.

So at first glance, the regression line (or slope) appears impressive. But after a second and more critical glance, we notice that the range of improvement is from roughly 36% to 37.8% — a decidedly and significantly much less impressive result.

In other words, by choosing to present and distort both the x- and y-axes this way, NMPED manages to make a statistical mountain out of what is literally a statistical molehill of change!