Do you recall the case of Sheri Lederman? The Long Island teacher who, apparently by all accounts other than her composite growth (or value-added) score is a terrific 4th grade/18 year veteran teacher, who received a score of 1 out of 20 after she scored a 14 out of 20 the year prior (see prior posts here, here and here; see also here and here)?

With her husband, attorney Bruce Lederman leading her case, she is suing the state of New York (the state in which Governor Cuomo is pushing to now have teachers’ value-added scores count for approximately 50% of their total evaluations) to challenge the state’s teacher evaluation system. She is also being fully supported by her students, her principal, her superintendent, and a series of VAM experts including: Linda Darling-Hammond (Stanford), Aaron Pallas (Columbia University Teachers College), Carol Burris (Educator and Principal of the Year from New York), Brad Lindell (Long Island Research Consultant), and me (Arizona State University) (see their/our expert witness affidavits here). See also an affidavit more recently submitted by Jesse Rothstein (Berkeley) here, as well as the full document explaining the entire case – the Memorandum of Law – here.

Well, the Ledermans had their day in court this past Wednesday (August 12, 2015).

It was apparent in the hearing that the Judge carefully read all the papers prior, and he was fully familiar with the issues. As per Bruce Lederman, “[t]he issue that seemed to catch the Judge’s attention the most was whether it was rational to have a system which decides in advance that 7% of teachers will be ineffective, regardless of actual results. The Judge asked numerous questions about whether it was fair to use a bell curve,” whereby when using a bell curve to distribute teachers’ growth or value-added scores, there will always be a set of “ineffective” teachers, regardless of whether in face they are truly “ineffective.” This occurs not naturally but by the statistical manipulation needed to fit all scores within the normal distribution needed to spread out the scores in order to make relative distinctions and categorizations (e.g., highly effective, effective, ineffective), the validity of which are highly uncertain (see, for example, a prior post here). Hence, “[t]he Judge pressed the lawyer representing New York’s Education Department very hard on this particular issue,” but the state’s lawyer did not (most likely because she could not) give the Judge a satisfactory explanation, justification, or rationale.

For more information on the case, see here the video that I feel best captures the case, thanks to CBS news in Albany. For another video see here, compliments of NBC news in Albany. See also two additional articles, here and here, with the latter including the photo of Sheri and Bruce Lederman pasted below. 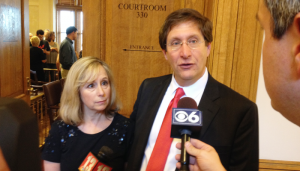