As you all likely recall, the American Federation of Teachers (AFT), joined by the Albuquerque Teachers Federation (ATF), last year, filed a “Lawsuit in New Mexico Challenging [the] State’s Teacher Evaluation System.” In December 2015, state District Judge David K. Thomson granted a preliminary injunction preventing consequences from being attached to the state’s teacher evaluation data. More specifically, Judge Thomson ruled that the state can proceed with “developing” and “improving” its teacher evaluation system, but the state is not to make any consequential decisions about New Mexico’s teachers using the data the state collects until the state (and/or others external to the state) can evidence to the court that the system is reliable, valid, fair, uniform, and the like (see prior post on this ruling here).

Late Friday afternoon, New Mexico’s Public Education Department (PED) announced that they are accordingly changing their NMTEACH teacher evaluation system, and they will be issuing new regulations. Their primary goal is as follows: To (1) “Address major liabilities resulting from litigation” as these liabilities specifically pertain to the former NMTEACH system’s (a) Uniformity, (b) Transparency, and (c) Clarity. On the surface level, this is gratifying to the extent that the state is attempting to, at least theoretically, please the court. But we, and especially those in New Mexico, might refrain from celebrating too soon…given when one reads the PED announcement here, one will see this is yet another example of the state’s futile attempts to keep with a very top-down teacher evaluation system. Note, however, that a uniform teacher evaluation system is also required under state law, although the governor has the right to change state statute should those at the state (including the governor, state superintendent, and PED) decide to eventually work with local districts and schools regarding the construction of a better teacher evaluation system for the state.

As per the PED’s subsequent goals, accordingly, things do not look much different than what they did in the past, especially given why and what got the state involved in such litigation in the first place. While the state also intends to (2) Simplify processes for districts/charters and also for the PED, and this is more or less fair, the state is also to (3) Establish a timeline for providing to districts and schools more current data in that currently such data are delayed by one school year, and these data are (still) needed for the state’s Pay for Performance plans (which was considered one high-stakes consequence at issue in Judge Thompson’s ruling). A tertiary goal is also to deliver in a more timely fashion such data to teacher preparation programs, which is something also of great controversy, as (uninformed) policymakers also continue to believe that colleges of education should also be held accountable for the test scores of their graduates’ students (see why this is problematic, for example, here). In the state’s final expressed goal, they make it explicit that (4) “Moving the timeline enhances the understanding that this system isn’t being used for termination decisions.” While this is certainly good, at least for now, the performance pay program is still something that is of concern. As is the state’s continued attempts to (still) use students’ test scores to evaluate teachers, and the state’s perpetual beliefs that the data errors also exposed by the lawsuit were the fault of the school districts, not the state, which Judge Thomson also noted.

Regardless, here is the state’s “Legal Rationale,” and here is also where things go a bit more awry. As re-positioned by the state/PED, they write that “the NEA and AFT recently advanced lawsuits set on eliminating any meaningful teacher evaluation [emphasis added to highlight the language that state is using to distort the genuine purposes of these lawsuits]. These lawsuits have exposed that the flexibility provided to local authorities has created confusion and complexity. Judge Thomson used this complexity when granting an injunction in the AFT case—citing a confusing array of classifications, tags, assessments, graduated considerations, etc. Judge Thomson made clear that he views this local authority as a threat to the statutorily required uniformity of the system [emphasis added given Judge Thompson said nothing of this sort, in terms of devaluing local authority or control, but rather, he emphasized the state’s menu of options was arbitrary and not uniform, especially given the consequences the state was requiring districts to enforce].” This, again, pertains to what is written in the current state statute in terms of a uniform teacher evaluation system.

Accordingly, and unfortunately, the state’s proposed changes would: “Provide a single plan that all districts and charters would use, providing greater uniformity,” and “Simplify the model from 107 possible classifications to three.” See three other moves detailed in the PED announcement here (e.g., moving data delivery dates, eliminating all but three tests, and the fall 2016 date which all of this is to become official).

Related, see a visual of what the state’s “new and improved” teacher evaluation system, in response to said litigation, is to look like. Unfortunately, again, it really does not look much different than it did prior except, perhaps, in the proposed reductions of testing options. See also the full document from which all of this came here. 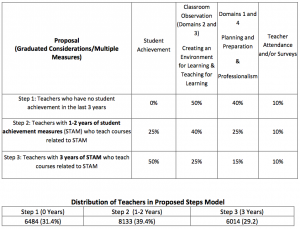 Nonetheless, we will have to wait to see if this, again, will please the court, and Judge Thompson’s ruling that the state is not to make any consequential decisions about New Mexico’s teachers using the data the state collects until the state (and/or others external to the state) can evidence to the court that the system is reliable, valid, etc.

And as for what the President of the American Federation of Teachers (AFT) New Mexico – Stephanie Biondo-Ly – had to say in response, see her press release below. See also an article in the Las Cruces – Sun Times here, in which President Ly is cited as “denounc[ing] the changes and call[ing] them attempts to obscure deficiencies in the [state’s] evaluation system.” From her original press release, she also wrote: “We are troubled…that once again, these changes are being implemented from the top down and if the secretary [Hanna Skandera] and her [PED] staff were serious about improving student outcomes and producing a fair evaluation system, they would have involved teachers, principals, and superintendents in the process.” 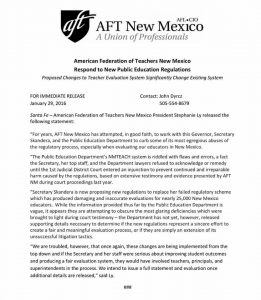