More than three dozen teachers,”including many who [had] just been rated “highly effective” by the New Mexico Public Education Department, working in the Albuquerque Public School District – the largest public school district in the state of New Mexico – turned to a burning bin this week, tossing their state-developed teacher evaluations into the fire in protest in front of district headquarters.

See the full article (with picture below) in The Albuquerque Journal here. 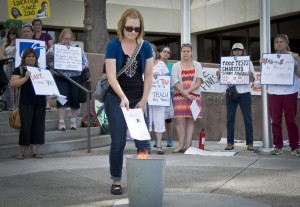 “Courtney Hinman ignited the blaze by taking a lighter to his “effective” evaluation. He was quickly followed by a “minimally effective” special education teacher from Albuquerque High School, then by a “highly effective” teacher from Monte Vista Elementary School. Wally Walstrom, also of Monte Vista Elementary, told the crowd of 60 or 70 people that his “highly effective” rating was “meaningless,” before tossing it into the fire. One after another, teachers used the words “meaningless” and “unfair” to describe the evaluations and the process used to arrive at those judgments…Another teacher said the majority of his autistic, special-needs students failed the SBA – a mandatory assessment test – yet he was judged “highly effective. ‘How can that be?’ he asked as he dropped his evaluation into the fire.”

“An English teacher said he was judged on student progress – in algebra and geometry.
Another said she had taught a mere two months, yet was evaluated as if she had been in the classroom for an entire school year. Several said their scores were lowered only because they were sick and stayed away from school. One woman said parents routinely say she’s the best teacher their children have ever had, yet she was rated ‘minimally effective.’ An Atrisco Heritage teacher said most of the math teachers there had been judged ‘minimally effective.’ And a teacher of gifted children who routinely scored at the top in assessment testing asked, ‘How could they advance?’ before tossing his “highly effective” evaluation into the blaze.”

Read the full article, again, here, and read more about what else is going on in New Mexico in prior posts on VAMboozled! here, here, here, and here.)