States of attention on this blog, and often of (dis)honorable mention as per their state-level policies bent on value-added models (VAMs), include Florida, New York, Tennessee, and New Mexico. As for a quick update about the latter state of New Mexico, we are still waiting to hear the final decision from the judge who recently heard the state-level lawsuit still pending on this matter in New Mexico (see prior posts about this case here, here, here, here, and here).

Another locale of great interest, though, is the Houston Independent School District. This is the seventh largest urban school district in the nation, and the district that has tied more high-stakes consequences to their value-added output than any other district/state in the nation. These “initiatives” were “led” by soon-to-resign/retire Superintendent Terry Greir who, during his time in Houston (2009-2015), implemented some of the harshest consequences ever attached to teacher-level value-added output, as per the district’s use of the Education Value-Added Assessment System (EVAAS) (see other posts about the EVAAS here, here, and here; see other posts about Houston here, here, and here).

In fact, the EVAAS is still used throughout Houston today to evaluate all EVAAS-eligible teachers, to also “reform” the district’s historically low-performing schools, by tying teachers’ purported value-added performance to teacher improvement plans, merit pay, nonrenewal, and termination (e.g., 221 Houston teachers were terminated “in large part” due to their EVAAS scores in 2011). However, pending litigation (i.e., this is the district in which the American and Houston Federation of Teachers (AFT/HFT) are currently suing the district for their wrongful use of, and over-emphasis on this particular VAM; see here), Superintendent Grier and the district have recoiled on some of the high-stakes consequences they formerly attached to the EVAAS  This particular lawsuit is to commence this spring/summer.

Nonetheless, my most recent post about Houston was about some of its future school board candidates, who were invited by The Houston Chronicle to respond to Superintendent Grier’s teacher evaluation system. For the most part, those who responded did so unfavorably, especially as the evaluation systems was/is disproportionately reliant on teachers’ EVAAS data and high-stakes use of these data in particular (see here).

Most recently, however, as per a “split” decision registered by Houston’s current school board (i.e., 4:3, and without any new members elected last November), Superintendent Grier received a $98,600 bonus for his “satisfactory evaluation” as the school district’s superintendent. See more from the full article published in The Houston Chronicle. As per the same article, Superintendent “Grier’s base salary is $300,000, plus $19,200 for car and technology allowances. He also is paid for unused leave time.”

More importantly, take a look at the two figures below, taken from actual district reports (see references below), highlighting Houston’s performance (declining, on average, in blue) as compared to the state of Texas (maintaining, on average, in black), to determine for yourself whether Superintendent Grier, indeed, deserved such a bonus (not to mention salary).

Another question to ponder is whether the district’s use of the EVAAS value-added system, especially since Superintendent Grier’s arrival in 2009, is actually reforming the school district as he and other district leaders have for so long now intended (e.g., since his Superintendent appointment in 2009). 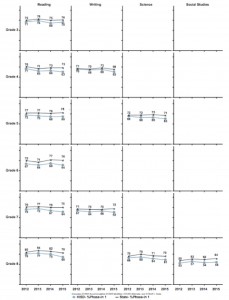 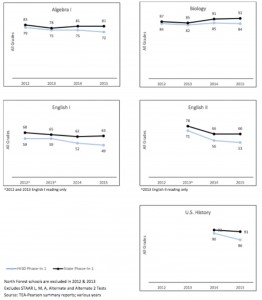 1 thought on “Houston’s “Split” Decision to Give Superintendent Grier $98,600 in Bonuses, Pre-Resignation”