The District of Columbia Public Schools (DCPS) is soon to vote on yet another dramatic new educational policy that, as described in an email/letter to all members of the American Federation of Teachers (AFT) by AFT President Randi Weingarten, “would make it impossible for educators, parents and the general public to judge whether some of DCPS’ core instructional strategies and policies are really helping District children succeed.”

As per Weingarten: “Over a year ago, the Washington [DC] Teachers’ Union filed a Freedom of Information Act (FOIA) request to see the data from the school district’s IMPACT [teacher] evaluation system—a system that’s used for big choices, like the firing of 563 teachers in just the past four years, curriculum decisions, school closures and more [see prior posts about this as related to the IMPACT program here]. The FOIA request was filed because DCPS refused to provide the data….[data that are]…essential to understanding and addressing the DCPS policies and practices that impact” teachers and education in general.

Not only are such data crucial to build understandings, as noted, but they are also crucial in support of a functioning democracy, to allow others within a population concerned with a public institution test the mandates and policies they collectively support, in theory or concept (perhaps) but also via public taxes.

Regardless, soon after the DC union filed the FOIA, DCPS (retaliated, perhaps, and) began looking to override FOIA laws through “a radical new secrecy provision to hide the information that’s being used to make big decisions” like those associated with the aforementioned IMPACT teacher evaluation system.

Sound familiar? See prior posts about other extreme governmental moves in the name of secrecy, or rather educational policies at all costs, namely in New Mexico here and here.

You can send a letter to those in D.C. to vote NO on their “Educator Evaluation Data Protection” provisions by clicking here.

As per another post on this topic, in GFBrandenburg’s Blog — that is “Just a blog by a guy who’s a retired math teacher” — Brandenburg did leak some of the data now deemed “secret.” Namely, he “was leaked,” by an undisclosed source, “the 2009-10 IMPACT sub-scores from the Value-Added Monstrosity (VAM) nonsense and the Teaching and Learning Framework (TLF), with the names removed. [He] plotted the two [sets of] scores and showed that the correlation was very, very low, in fact about 0.13 [r-squared=0.33], or nearly random, as you [can] see here:” 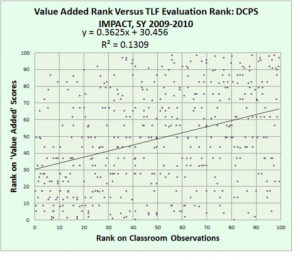 In the world of correlation, this is atrocious, IF high-stakes (e.g., teacher termination, tenure, merit pay) are to be attached to such output. No wonder DCPS does not want people checking in to see if that which they are selling is true to what is being sold.

In Brandenburg’s words: “Value-Added scores for any given teacher jumped around like crazy from year to year. For all practical purposes, there is no reliability or consistency to VAM whatsoever. Not even for elementary teachers who teach both English and math to the same group of children and are ‘awarded’ a VAM score in both subjects. Nor for teachers who taught, say, both 7th and 8th grade students in, say, math, and were ‘awarded’ VAM scores for both grade levels: it’s as if someone was to throw darts at a large chart, blindfolded, and wherever the dart lands, that’s your score.”