Following-up on two prior posts about potential bias in teachers’ observations (see prior posts here and here), another research study was recently released evidencing, again, that the evaluation ratings derived via observations of teachers in practice are indeed related to (and potentially biased by) teachers’ demographic characteristics. The study also evidenced that teachers representing racial and ethnic minority background might be more likely than others to not only receive lower relatively scores but also be more likely identified for possible dismissal as a result of their relatively lower evaluation scores.

The Regional Educational Laboratory (REL) authored and U.S. Department of Education (Institute of Education Sciences) sponsored study titled “Teacher Demographics and Evaluation: A Descriptive Study in a Large Urban District” can be found here, and a condensed version of the study can be found here. Interestingly, the study was commissioned by district leaders who were already concerned about what they believed to be occurring in this regard, but for which they had no hard evidence… until the completion of this study.

Authors’ key finding follows (as based on three consecutive years of data): Black teachers, teachers age 50 and older, and male teachers were rated below proficient relatively more often than the same district teachers to whom they were compared. More specifically,

This is certainly something to (still) keep in consideration, especially when teachers are rewarded (e.g., via merit pay) or penalized (e.g., vie performance improvement plans or plans for dismissal). Basing these or other high-stakes decisions on not only subjective but also likely biased observational data (see, again, other studies evidencing that this is happening here and here), is not only unwise, it’s also possibly prejudiced.

While study authors note that their findings do not necessarily “explain why the
patterns exist or to what they may be attributed,” and that there is a “need
for further research on the potential causes of the gaps identified, as well as strategies for
ameliorating them,” for starters and at minimum, those conducting these observations literally across the country must be made aware.

Last spring, Eduardo Porter – writer of the Economic Scene column for The New York Times – wrote an excellent article, from an economics perspective, about that which is happening with our current obsession in educational policy with “Grading Teachers by the Test” (see also my prior post about this article here; although you should give the article a full read; it’s well worth it). In short, though, Porter wrote about what economist’s often refer to as Goodhart’s Law, which states that “when a measure becomes the target, it can no longer be used as the measure.” This occurs given the great (e.g., high-stakes) value (mis)placed on any measure, and the distortion (i.e., in terms of artificial inflation or deflation, depending on the desired direction of the measure) that often-to-always comes about as a result.

Well, it’s happened again, this time in Miami-Dade, Florida, where the Miami-Dade district’s teachers are saying its now “getting harder to get a good evaluation” (see the full article here). Apparently, teachers evaluation scores, from last to this year, are being “dragged down,” primarily given teachers’ students’ performances on tests (as well as tests of subject areas that and students whom they do not teach).

“In the weeks after teacher evaluations for the 2015-16 school year were distributed, Miami-Dade teachers flooded social media with questions and complaints. Teachers reported similar stories of being evaluated based on test scores in subjects they don’t teach and not being able to get a clear explanation from school administrators. In dozens of Facebook posts, they described feeling confused, frustrated and worried. Teachers risk losing their jobs if they get a series of low evaluations, and some stand to gain pay raises and a bonus of up to $10,000 if they get top marks.”

As per the figure also included in this article, see the illustration of how this is occurring below; that is, how it is becoming more difficult for teachers to get “good” overall evaluation scores but also, and more importantly, how it is becoming more common for districts to simply set different cut scores to artificially increase teachers’ overall evaluation scores. 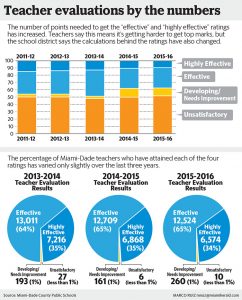 “Miami-Dade say the problems with the evaluation system have been exacerbated this year as the number of points needed to get the “highly effective” and “effective” ratings has continued to increase. While it took 85 points on a scale of 100 to be rated a highly effective teacher for the 2011-12 school year, for example, it now takes 90.4.”

This, as mentioned prior, is something called “artificial deflation,” whereas the quality of teaching is likely not changing nearly to the extent the data might illustrate it is. Rather, what is happening behind the scenes (e.g., the manipulation of cut scores) is giving the impression that indeed the overall teacher system is in fact becoming better, more rigorous, aligning with policymakers’ “higher standards,” etc).

This is something in the educational policy arena that we also call “symbolic policies,” whereas nothing really instrumental or material is happening, and everything else is a facade, concealing a less pleasant or creditable reality that nothing, in fact, has changed.

Citation: Gurney, K. (2016). Teachers say it’s getting harder to get a good evaluation. The school district disagrees. The Miami Herald. Retrieved from http://www.miamiherald.com/news/local/education/article119791683.html#storylink=cpy

From a prior post coming from Ohio (see here), you may recall that Ohio state legislators recently introduced a bill to review its state’s value-added model (VAM), especially as it pertains to the state’s use of their VAM (i.e., the Education Value-Added Assessment System (EVAAS); see more information about the use of this model in Ohio here).

As per an article published last week in The Columbus Dispatch, the Ohio Department of Education (ODE) apparently rejected a proposal made by the state’s pro-charter school Ohio Coalition for Quality Education and the state’s largest online charter school, all of whom wanted to add (or replace) this state’s VAM with another, unnamed “Similar Students” measure (which could be the Student Growth Percentiles model discussed prior on this blog, for example, here, here, and here) used in California.

The ODE charged that this measure “would lower expectations for students with different backgrounds, such as those in poverty,” which is not often a common criticism of this model (if I have the model correct), nor is it a common criticism of the model they already have in place. In fact, and again if I have the model correct, these are really the only two models that do not statistically control for potentially biasing factors (e.g., student demographic and other background factors) when calculating teachers’ value-added; hence, their arguments about this model may be in actuality no different than that which they are already doing. Hence, statements like that made by Chris Woolard, senior executive director of the ODE, are false: “At the end of the day, our system right now has high expectations for all students. This (California model) violates that basic principle that we want all students to be able to succeed.”

The models, again if I am correct, are very much the same. While indeed the California measurement might in fact consider “student demographics such as poverty, mobility, disability and limited-English learners,” this model (if I am correct on the model) does not statistically factor these variables out. If anything, the state’s EVAAS system does, even though EVAAS modelers claim they do not do this, by statistically controlling for students’ prior performance, which (unfortunately) has these demographics already built into them. In essence, they are already doing the same thing they now protest.

Indeed, as per a statement made by Ron Adler, president of the Ohio Coalition for Quality Education, not only is it “disappointing that ODE spends so much time denying that poverty and mobility of students impedes their ability to generate academic performance…they [continue to] remain absolutely silent about the state’s broken report card and continually defend their value-added model that offers no transparency and creates wild swings for schools across Ohio” (i.e., the EVAAS system, although in all fairness all VAMs and the SGP yield the “wild swings’ noted). See, for example, here.